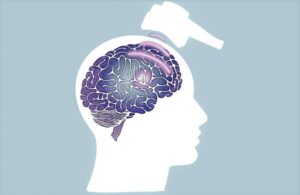 Transcranial magnetic stimulation delivers short magnetic pulses to specific regions of the brain. It does so to stimulate the neurons in those areas. TMS is non-invasive and requires no anesthesia. Therefore, during the session, the patient remains awake and alert.

What happens in a TMS session?

Because the treatment involves magnets, patients are first asked to remove metallic items (e.g., jewelry). They are also provided with earplugs because the TMS machine produces loud clicking sounds while delivering pulses. The patient then sits comfortably in a chair while the technician determines the intensity of stimulation needed by delivering a few brief pulses and checking the patient’s motor reaction.

Subsequently, the stimulation coil is placed next to the target area, which is usually the prefrontal cortex (the front part of the brain). Then the device begins delivering pulses. These pulses cause brief activity in the brain cells in the target area. The length of the session depends on numerous factors (e.g., the coil, the protocol), but it is usually less than an hour. The treatment is typically repeated five times a week, for about four to six weeks. Since anesthesia is not used during the treatment, once the session is over, the patient can get back to normal life right away. Compared to common medical treatments for depression, like antidepressants, TMS has fewer side effects. Perhaps the most common side effect of TMS is a headache. A worrisome side effect of TMS is a seizure, but the risk of seizure resulting from treatment is considered very low.

TMS for treatment of depression disorder

According to the Diagnostic and Statistical Manual of Mental Disorders (DSM–5), major depressive disorder is characterized by depressed mood, reduced feelings of pleasure, weight loss or weight gain, sleeping too much or too little, motor changes (e.g., agitation), fatigue, feelings of worthlessness, concentration difficulties, and thoughts of suicide. Sometimes psychotherapy and medications work well for depression. Some patients, however, who do not find relief, have found new treatments like TMS helpful.

And research suggests TMS can indeed help patients with depression. For instance, a randomized clinical trial, funded by the National Institute of Mental Health, found that three times as many people receiving TMS, compared to a sham treatment, experienced remission of depressive symptoms. Note, sham treatments are used to rule out psychological and various other factors that may explain the positive results of a study. In short, the use of sham treatments increases researchers’ confidence in their findings.

A related question that has less of a clear answer is the question of how TMS improves depression. The exact mechanisms are not known but are probably related to how electromagnetic induction changes the excitability of neurons in brain areas related to depression. Note, high-frequency stimulation (e.g., ≥ 5 Hz) is used to increase neuronal excitability, while low-frequency stimulation (≤ 1 Hz) is used to decrease neuronal excitability. In the treatment of depression, the targeted area is often the dorsolateral prefrontal cortex, which is involved in cognitive control and regulation of emotions. The goal is to produce lasting, positive changes in the functioning of these areas.

In summary, TMS is a treatment that has received considerable research attention for treating a variety of mental health conditions, especially depression. And research suggests that for some people with depression, TMS can be an effective treatment with few side effects.