Groupthink and how it impacts Values, Opinions, and Beliefs 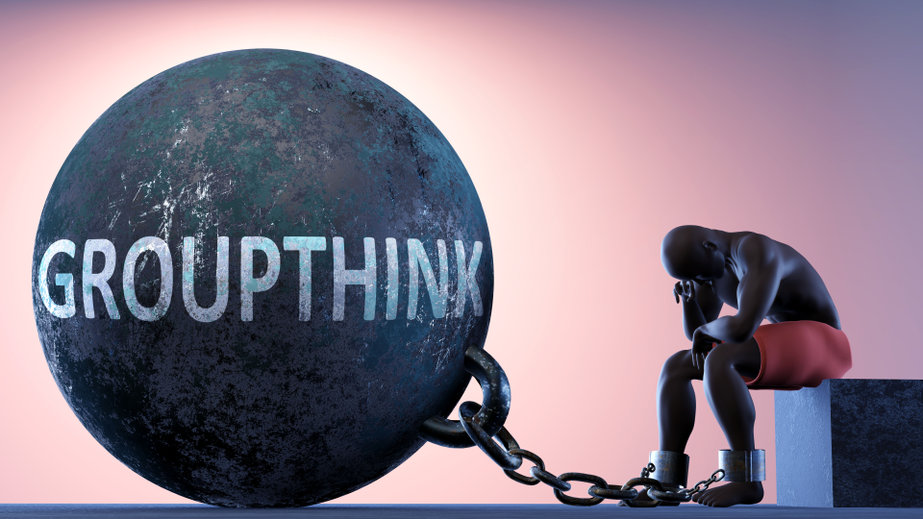 The term “groupthink” was coined in the early 1970s by psychologist Irving L. Janis. In 1972, Janis published his book Victims of Groupthink: A Psychological Study of Foreign-Policy Decisions and Fiascoes. Janis defines ”groupthink” as a “psychological drive for consensus at any cost that suppresses dissent and appraisal of alternatives in cohesive decision-making groups.” Janis identified eight symptoms of groupthink, including illusions of invulnerability, unquestioned beliefs, rationalizing, stereotyping, self-censorship, “mind guards,” illusions of unanimity, and direct to pressure. Janis blamed groupthink for several political “fiascos,” such as the Bay of Pigs invasion, the failure to prepare for the attack on Pearl Harbor, the escalation of the Vietnam War, and the Watergate coverup. Scholars have gone on to blame later events, including the decision to launch the doomed space shuttle Challenger, the Iran-Contra affair, and the Enron scandal on groupthink.

Groupthink is a psychological phenomenon in which people strive for consensus within a group. Groupthink occurs when a group forms a quick opinion that matches the group consensus, rather than critically evaluating the information. Mass hysteria can be seen as an extreme example of groupthink. In many cases, people will set aside their own personal beliefs or adopt the opinion of the rest of the group. People who are opposed to the decisions or overriding opinions of the group as a whole frequently remain quiet, preferring to keep the peace rather than disrupt the uniformity of the crowd. The phenomenon can be problematic, but even well-intentioned people are prone to making irrational decisions in the face of overwhelming pressure from the group.

Groupthink seems to occur most often when a respected or persuasive leader is present, inspiring members to agree with his/her opinion. Groupthink is sometimes positive but is more often seen in a negative light, particularly in the U.S. and other countries that value individual opinion.

Groupthink is most often associated with business, politics, and policymaking, but it also relates to the psychology of collective phobias and mass hysteria. It’s believed that groupthink increases as group cohesiveness increases, which may help explain the psychological phenomenon of mass hysteria. Also known as epidemic hysteria, mass psychogenic illness, and mass sociogenic illness, mass hysteria is “a constellation of symptoms suggestive of organic illness, but without an identifiable cause, that occurs between two or more people who share beliefs related to those symptoms,” according to a 1997 review of research by The Johns Hopkins University School of Hygiene and Public Health. It is “seen as a social phenomenon involving otherwise healthy people.” Beyond causing mass hysteria, groupthink can discourage independent thinking in both school and the workplace.

Groupthink may not always be easy to discern, but there are some signs that it is present. There are also some situations where it may be more likely to occur. Janis identified a number of different “symptoms” that indicate groupthink.

Why does groupthink occur?

Think about the last time you were part of a group, perhaps during a school project. Imagine that someone proposes an idea that you think is quite poor. However, everyone else in the group agrees with the person who suggested the idea, and the group seems set on pursuing that course of action. Do you voice your dissent or do you just go along with the majority opinion? In many cases, people end up engaging in groupthink when they fear that their objections might disrupt the harmony of the group or suspect that their ideas might cause other members to reject them.

A number of factors can influence this psychological phenomenon. Some causes:

Groupthink can cause people to ignore important information and can ultimately lead to poor decisions. This can be damaging even in minor situations but can have much more dire consequences in certain settings. Medical, military, or political decisions, for example, can lead to unfortunate outcomes when they are impaired by the effects of groupthink.

Groupthink, The psychological phenomenon may have costs:

It is important to note that while groupthink and conformity are similar and related concepts, there are important distinctions between the two. Groupthink involves the decision-making process.

On the other hand, conformity is a process in which people change their own actions so they can fit in with a specific group. Conformity can sometimes cause groupthink, but it is not always the motivating factor.

While groupthink can generate consensus, it is by definition a negative phenomenon that results in faulty or uninformed thinking and decision-making. Some of the problems it can cause include:

Group consensus can allow groups to make decisions, complete tasks, and finish projects quickly and efficiently—but even the most harmonious groups can benefit from some challenges. Finding ways to reduce groupthink can improve decision-making and assure amicable relationships within the group.

There are steps that groups can take to minimize this problem. First, leaders can give group members the opportunity to express their own ideas or argue against ideas that have already been proposed.

Breaking up members into smaller independent teams can also be helpful.

When people in groups have diverse backgrounds and experiences, they are better able to bring different perspectives, information, and ideas to the table. This enhances decisions and makes it less likely that groups will fall into groupthink patterns.